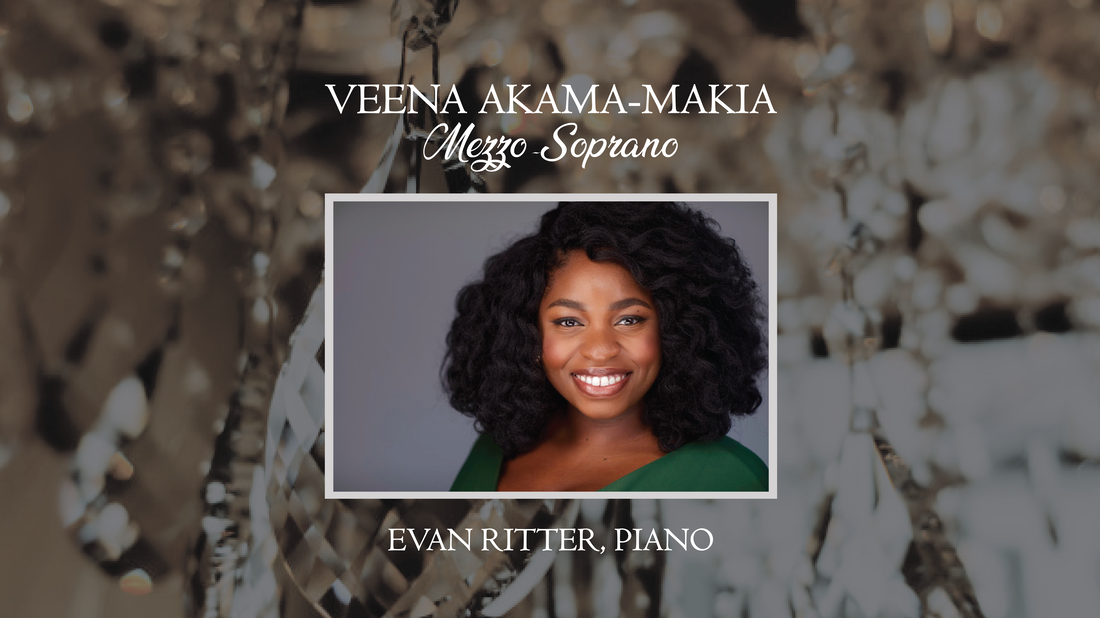 ​Florence Price (1887-1953)
​
For this concert, I wanted to highlight the stories of women, who were traditionally marginalized in the world of classical music. Florence Price is a composer who has been a powerful influence in my life. My connection with her is rooted in our shared experiences as women of color from the South. Florence Price was a fierce pioneer who paved the way for so many African-American musicians. This performance features five pieces from her collection of art songs and spirituals. I chose these pieces as they tell the story of a young woman who finds the courage and strength to hold on to hope in a world that seems determined to shatter it. - Veena Akama-Makia

I have been in love with Dvorak's “Gyspy Songs” since the first time I heard them. During the past twelve months, the yearning for freedom, the fear of the unknown, and the longing for the family have been themes that shaped my life. Through the “Gypsy Songs”, I have been able to find a sense of peace, despite the ever-present feeling that the world around me was in a constant state of chaos.  As I perform these pieces, I hope you will also feel that same sense of peace, which I found in the words of the poet Adolf Heyduk. - Veena Akama-Makia

The pandemic has given me an opportunity to learn new pieces of music. Among them, are a group of art songs, the Three Dream Portraits composed by Margaret Bonds. I was introduced to these works by, Reflections Through the River, a visual album directed and conceived by Allison Lewis. The work explores the historically racist, destructive, and dehumanizing images of Black women in media and its consequences. I chose Three Dream Portraits as a reminder that Black women still face discrimination and misrepresentation. I want to use my voice for those who cannot, those who still live in fear of speaking out against injustice in our times. - Veena Akama-Makia

I chose this piece for tonight’s recital in honor of a woman who played an instrumental and inspirational role in my journey as an artist. The late African-American mezzo-soprano Shirley Verrett is one of my role models. Her mesmerizing performance of O, Mio Fernando from Donizetti’s opera La favorita, inspired me to study this aria and perform it here tonight. - Veena Akama-Makia

Cinco Canciones Negras by Xavier Montsalvatge focuses on the lives of Afro-Cuban and Creole women during the Spanish Civil War of the late 1930s. I chose this specifically because the perspectives and experiences of women of African descent are rarely highlighted in classical music, and I felt these powerful pieces illustrate the ever-changing and challenging environment in Cuba at that time. - Veena Akama-Makia

I would like to thank the Church of St. Thomas More and their musical director Connor Doran for allowing us to use the church as a venue for this recital. I would also like to thank Evan Ritter for his hard work as my collaborator; and Professor Kathryn Cowdrick for her patience and encouragement over these past years and for connecting me with Matthew Hileman and the Marilyn Horne Museum. Without her help, this recital would not have been possible.  Finally, I want to thank my family for their constant love, my mentors for their guidance, and my friends for being supportive. You all mean so much to me, and I appreciate you for being a part of my journey. I hope that these pieces have a place in your heart as they have a place in mine!

Song to the Dark Virgin
Poem by Langston Hughes

The meaning of Langston's Hughes's enigmatic poem Song to the Dark Virgin has been debated by scholars.  Its interpretation is dependent on the personal experiences and perspectives of the reader, or, in this case, the listener.

Would
That I were a garment
A shimmering, silken garment
That all my folds
Might wrap about thy body
Absorb thy body
Hold and hide thy body
Thou dark one

Would
That I were a flame
But one sharp, leaping flame
To annihilate thy body
Thou dark one

Academics and biographers frequently disagree about the meaning of the works of Langston Hughes, which can, at first glance, appear deceptively simple. Often the perspective of the reader is subjective of their own life experiences. Whatever the ultimate intention of Bewilderment, it is a summation of the human experience, where each of us is perpetually presented with conflicting choices and societal pressures. Ultimately we seek the guidance of the divine for clarity.

Sympathy
Poem by Paul Laurence Dunbar
​
Sympathy is an undated work set to the poem of the same title of the African-American writer Paul Laurence Dunbar. Dunbar was born in Kentucky in 1872 and became one of the first influential Black poets in American literature. The familiar words, "I know why the caged bird sings" were adopted by Maya Angelou as the title of her seminal autobiography first published in 1969.

I know why the caged bird beats his wing
Till its blood is red on the cruel bars;
For he must fly back to his perch and cling
When he fain would be on the bough a-swing;
And a pain still throbs in the old, old scars
And they pulse again with a keener sting --
I know why he beats his wing!

Hold Fast to Dreams is based on the poem Dreams by Langston Hughes. First published in 1923, the short piece reflects common themes in Hughes' works - the importance of dreams in the face of suppression and the power of hope in preserving our individual humanity.

The prevalent Romanticism of the 19th century led many artists across a variety of mediums to view native cultures as "exotic."  Dvorak's "Gypsy Songs" fall into this category. And like most Western interpretations of non-Western or indigenous cultures, Dvorak's "gypsy" compositions are inspired less by authentic cultural traditions than they are of Slovakian themes and those of his native Bohemia. The work of Florence Price has often been compared to Dvorak's as both composers incorporated themes of their ancestral lands and cultures into their works and collaborated with prominent poets to set their words to music.  Price's symphonic works also share the same powerful complexity of many of Dvorak's compositions.
Margaret Bonds and Langston Hughes - Three Dream Portraits

Minstrel Man needs little interpretation as it references the minstrel performers of the 19th and 20th centuries. Although once wildly popular with many white audiences around the United States, the depictions of African-Americans in minstrel shows were saturated with stereotypes and racist tropes. For people of color, the minstrel man represents the deeply painful scars of racism, segregation, and historical marginalization.

Because my mouth
Is wide with laughter
And my throat
Is deep with song
You do not think
I suffer after
I have held my pain
So long?

Because my mouth
Is wide with laughter
You do not hear
My inner cry?
Because my feet
Are gay with dancing
You do not know
I die?

Dream Variation is a powerful poem that encapsulates the zeitgeist of the Civil Rights Movement. The dream of the narrator is to be finally liberated and live in a world free of all oppression.

To fling my arms wide
In some place of the sun
To whirl and to dance
Till the white day is done
Then rest at cool evening
Beneath a tall tree
While night comes on gently
Dark like me--
That is my dream!

To fling my arms wide
In the face of the sun
Dance! Whirl! Whirl!
Till the quick day is done
Rest at pale evening . .
A tall, slim tree . .
Night coming tenderly
Black like me

The third of Bonds's "Dream Portraits" evokes the often silent suffering of African-Americans who struggled under segregation. The dream here is to be seen and heard not as others, but as fellow Americans deserving of seat at the table.

I, too, sing America

Tomorrow
I'll be at the table
When company comes
Nobody'll dare
Say to me
"Eat in the kitchen,"
Then

Besides
They'll see how beautiful I am
And be ashamed--

I, too, am America
Gaetano Donizetti
​
O, mio Fernando (Oh, my Fernando)

O, mio Fernando is an aria written for La favorita, a romantic opera set against the backdrop of the Moorish conflicts in 14th-century Spain. The aria is sung by Leonora, "favorite" and mistress of King Alfonso of Castile. However, in typical operatic fashion, Leonora is not singing her passionate song of love and despair to the King, but to her lover Fernando.
Xavier Montsalvatge - Cinco Canciones Negras

Cinco canciones negras marked Montsalvatge's first foray into vocal composition in 1945. Although operatic in nature, the work incorporates jazz chords, Cuban dance rhythms, and Caribbean percussive figures. In keeping with the theme of tonight's recital, these combine music and poetry. The following works not only focus on the lives of Afro-Cubans but were a political cry against the oppressive Franco regime, which had banned the publication of literature written about enslaved people of color and Native Americans in Spain and its colonies.
Encore

My Soul's Been Anchored in the Lord arranged by Florence Price

My Soul's Been Anchored in the Lord is a traditional African-American spiritual arranged by Florence Price and made famous by the pioneering American contralto Marian Anderson. Anderson was the first African-American to perform at the Metropolitan Opera and would go on to become a delegate to the United Nations Human Rights Committee and a Goodwill Ambassador for the United States Department of State, giving concerts around the world.